On 01-15-2015, Tjololo changed how 'HIT Scraper WITH EXPORT' stores its blocklist (as of v1.5.2 and newer), and this new storage method (localStorage) can be accessed by other scripts. I have an extensive blocklist set up in HIT Scraper With Export (just 'HIT Scraper' for short hereafter), and have various issues with the previously-existing options for blocking requester on the regular MTurk search results pages. So I made this userscript to replace the old blocking options and use my more-complete HIT Scraper blocklist everywhere. Even if you don't use HIT Scraper, you can use my blocking script by itself, if you want; and if you ever decide to start using HIT Scraper, it should pick up on the same blocklist you created in this script.

You can block both by exact requester names and by exact HIT titles, within the same blocklist (the same way HIT Scraper's blocking works), with a single ^ character in between each name or title. As of v3.0c, this script now also includes buttons on every HIT to add their requester or title to the blocklist. And as always, you can also choose to do all your blocking from within HIT Scraper and then enjoy the effects on the regular pages. I prefer to use the 'Edit Blocklist' manual editor to paste the names/titles into the list in a certain order to keep it more organized. If you want an easier way to copy the linked text of the names/titles for pasting into the manual editor, I suggest using a browser extension/add-on such as: for Firefox, Easy Copy (site) (I use this one), CoLT (site), or Copy Link Text; or for Chrome, Template (site) or Copy Link Text.

If you change your mind about something you blocked, use the 'Edit Blocklist' editor to remove it from the list. If you just want to temporarily see what's being hidden (for example, if you occasionally want to work on something from CrowdSource, but have them blocked), click the 'Show # Blocked' link to unhide the blocked HITs on that page of results. It then turns into a 'Hide # Blocked' link, which you can click again to re-hide them.

As of v1.2c, it displays a red border around unhidden blocked HITs, and lists the requester names whose HITs are currently being blocked on that page in the Show/Hide Blocked link's tooltip (shown on mouseover). And as of v2.0c, it also displays a green dashed border around HITs that match your includelist (favorite requesters) to make them easy to spot.

Like all standalone blocking scripts, it doesn't make more results appear on each page of results as replacements. You just get the unblocked portion of the original 10 results per page (as of 12-10-2015, now up to 100 results per page) that mturk provides, to make it easier to avoid HITs you know you don't want to do. If you want more results all at once, use HIT Scraper.

It's a good idea to save a copy of your blocklist in a textfile periodically (just open the blocklist editor and copy & paste into Notepad or similar), in case you accidentally (or intentionally) clear the part of your browser data that includes this storage. One of several ways this can happen is by clearing all cookies (you may be able to avoid that happening by excluding mturk.com and/or limiting the timeframe of what's being cleared). (By the way, clearing the wrong stuff in your browser that clears localStorage would also wipe out HIT Timer data, mmmturkeybacon Save Auto-Approval data, Dashboard Change data, etc.) Also note that your scripts can't access this data when you're in an incognito/private browsing window. 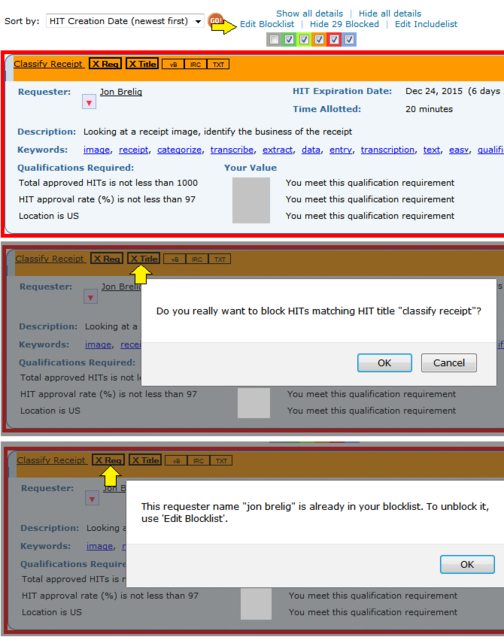 If you were using any of the old standalone blocking scripts, you should disable/remove them if you want to use this script instead: 'Block Requesters' (originally by ergoeigo aka ergo, in Jul 2009; updated by will.carle in Feb 2010; apparently still kinda works, but with error messages since 2012, and can interfere with Turkopticon since Fall 2014); 'Block Requesters (Fixed)' (by Aphit in Apr 2012, to update Ergo's script, but made it much more complex; still mostly works, but with some errors in some browsers; can't re-hide after clicking the 'show' link to unhide blocked requesters on a page, have to just refresh the page); and 'Block Individual Requests' (by turksquatch aka sasquatch in Oct 2012, based on the ergo/will.carle 'Block Requesters' script; apparently might not work for some people anymore).

Or if you were using the old HIT Database's built-in blocking feature, which doesn't provide any way to unblock or temporarily unhide HITs once you've blocked the requester (and it's possible to accidentally block everything! :-o ), use 'Clear BLOCK table in HITDB' if you want to stop using its blocking. That script puts a 'Delete Blocks' button at the bottom of your dashboard, to clear out the otherwise-unremovable HitDB blocks; after you clear out your current HitDB blocklist, just make sure not to click on its blocking buttons in the future (those will still be around, unless you stop using HitDB entirely). If you don't clear your HitDB blocklist, my blocking script should still work (according to testers), it just obviously won't be able to effectively unhide or unblock any HITs that are also being hidden by HitDB's blocking.

This script *is* compatible with mmmturkeybacon Color Coded Search with Checkpoints's feature that allows hiding HITs with certain colors based on average Turkopticon review scores. Any HITs already hidden by my blocking script will remain hidden regardless of your color-coded hiding choices, while non-blocked HITs can be hidden/shown according to your color choices.