If you paste in your HIT Scraper blocklist and includelist inside this script's code, you can see on the TO site if an MTurk requester's name is already on your blocklist or includelist.

I tend to periodically look at recent Turkopticon reviews, see a requester I don't like the sound of, and go check my blocklist editor to see whether I already have them blocked. So I made this to save a little time/hassle on some of those repeated checks. I paste my current lists into my copy of this script about once a week (I've been using it myself for a while before releasing it). It's probably a niche use case, but maybe someone else will find it helpful too.

The part where you paste in your updates in your userscript manager's script editor is near the top:

// Paste the contents of your HIT Scraper blocklist onto the line below, between the quotes ("). You must manually re-paste it when you want to update this script's awareness of it. A script running on a different domain like this can't access where the original HIT Scraper data is saved.
var yourBlocklistHere = "";

// Likewise, paste the contents of your HIT Scraper includelist onto the line below, between the quotes (").
var yourIncludelistHere = "";

// State the date you last pasted in your updated HIT Scraper blocklist and includelist here, for reference in the indicators' text:
var lastUpdated = "";

It displays a clarification note in mouseover text when you move your mouse over the indicator text it displays on TO pages:

"Be aware that in some cases depending on how a review was submitted, the earliest name used by a requester may be displayed on the review instead of their most recent name, so make sure you have the older versions on your blocklist too; and in some cases a requester name that contains ampersands (&), apostrophes ('), or accented characters will be misinterpreted by TO and thus not be able to match your blocklist unless you add the messed-up version to it too."

(and likewise for the includelist). 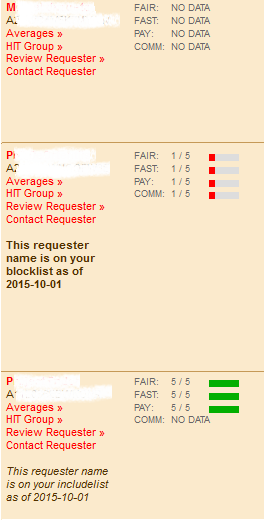