評論：OK - script works, but has bugs

goldnick7
§
發表於：
舉報留言
Can you update the script to add an option to allow instant download without the "save file" popup?

I used to use this ^ add-on before I found your script, and It was more convenient since you only have to click once and it instantly saves the file. So in my opinion an option to automatically save the image/vid when you click the download button is a must!
Neverlost
§
發表於：
舉報留言
+ 1 from me. Something like would be really useful.
ZhiYu_作者
§
發表於：
舉報留言

What does "save file popup" mean? It instant download when I clicking the download button on my computer (win 10 with Chrome/Firefox). Could you give me your environment and the screenshot of the popup?

Neverlost
§
發表於：
編輯:
舉報留言
Not the original poster but since I've requested the same thing the very moment you've also appeared and replied I will offer my insight.
I use the latest Waterfox on Windows 10 version and once I click the download button, the standard "save to" dialog pops up, I've attached a screenshot. I've just tested on Firefox and no pop up appears as you've said, however I've stopped using Firefox a long time ago, after they ditched XUL addons, as many others I simply can't use it anymore without all my fave addons/scripts (which often can't be replaced by watered down webextensions). Maybe OP uses a Firefox fork too, it'd be nice if you could try and make it work without the pop up appearing since your script has been the best option for downloading stuff from Instagram I've found so far (the addon listed by the OP for example, doesn't even work properly). I especially like the fact files are being downloaded with a unique prefix including the username but also a unique incremental number which allows for chronological order + locating duplicates. Do the numbers at the end of the file have any use btw? If not, could you offer the option to be omitted by the downloaded file so the "moby-20201206_182840-129720309_215513703450125_8772020434803444488_n" becomes "moby-20201206_182840-129720309" or even "moby-20201206_182840"? Personally I'd be fine with a username/date/time and a number differentiating multiple files prefix, in case they were uploaded at the same time. 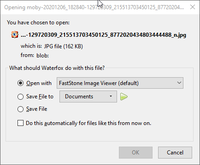 Have you try to select "Save file" radio button and "Do this automatically for files like this from now on." checkbox in the screenshot? Besides, also select the "Save files to ..." radio button in the browser setting.

Neverlost
§
發表於：
舉報留言
Thanks for the reply.

About the "save file" pop up, I understand what you are saying but doing that would result in every file of the same type following the same general rule (on every site) which might not be convenient/desirable. I wonder if it's possible for the script to prevent the pop up from appearing, forcing files downloaded with it to be saved without the pop up and why not, in a predefined folder if possible. I could be wrong of course, but I think I've seen that feature in some other similar addon and/or script.

About the naming rule, cool, the important thing is keeping the date the file was uploaded in the prefix (rather than the date/time you download it). And you don't need to say "sorry", you are doing this for fun, spending your personal time so no reasonable person takes it for granted, take your time. :) Thanks!
goldnick7
§
發表於：
舉報留言
Totally agree with Neverlost. Good ideas.

Often I use the popup often to click cancel (when some sites try to save automatically). But yeah for some sites I want to always save instantly, but not for all sites. Unfortunately Firefox doesn't have option to use different setting for each site.

Something I wanted to add, is that this script is not "compatible" with a Firefox add-on called "Imagus". Because whenever you hover the download button, it spawns the image since it has the link. So perhaps if you could add an option to make it so that the buttons don't have a link. Someone had asked you to add the links on the buttons, but is there an option to remove them?
ZhiYu_作者
§
發表於：
編輯:
舉報留言

As I know, the userscript couldn't prevent the pop up. But I am not very familiar with JavaScript and Web APIs, maybe I am wrong. Therefore, I am interested in the userscrip which can instantly download the file to a specific folder. Could you provide that userscript to me for reference?

Ok, I will add this option to my to-do list.