Ben Peterson's HITs include "Rate Dating Profile Photos" for 8 different demographic groups (male or female, for 4 different age ranges, together covering all ages), "Rate Business Profile Photos", and "Rate Social Profile Photos". They've been posting since July 2013. Until on or about July 20, 2015, they previously had the following policy in the instructions section at the bottom of each HIT:

" Gender/Age Restrictions
For this HIT to yield useful results, we require that workers be of a specific gender and age group. We have intermittently available HIT groups for both males and females across all ages, so please find the proper one for you.
Workers submitting to multiple gender/age groups may have their submissions rejected. (Unless you actually changed ages; a one-time age group increase is allowed.) "​

The requester mentioned on Reddit in March 2015 that until he could eventually be able to get a more automated system in place, he was handling people taking the wrong demographic's HITs by "running a script every month or so on my collected data to identify abusive workers and block them".

" Gender & Birth Year
You may skip this section if you have filled it out before. If in doubt, please fill it in again. If we do not have your data from a previous HIT or your answers are inconsistent then your work will be rejected.

Gender/Age Restrictions
DATING CATEGORY HITs have restrictions on worker gender and age as requested by the photo owner. We have intermittently available HIT groups for both males and females across all ages, so please find the proper one for you. "

There have been a few reports of people getting rejections/blocks for overlooking the new requirement to answer demographic questions. It says you only have to answer them once and can leave them unanswered on future HITs, but a few people think they might have been rejected on some due to not re-answering on those every time. By answering those questions every time (and always only doing the correct HIT group), so far I haven't run into such issues myself.

It seems it would be a good precaution to answer those questions on every one of his HITs, but that's a bit much for just three cents, so I made this script. It won't do anything until you edit the script's code to specify the answers that are accurate for you. I've tested it on the business HIT group, the social HIT group, my demographic's dating HIT group, and previews of several other dating HIT groups. Always take a quick look at what you're submitting before you do, in case he changes the HITs again in the future. And never submit a dating HIT for the wrong demographic group, the requester is serious about the consequences of doing that. Turk responsibly.

Screenshot of what one of the new HIT groups looks like by default (when this script is set up, it selects your answers in the part in the red oval): 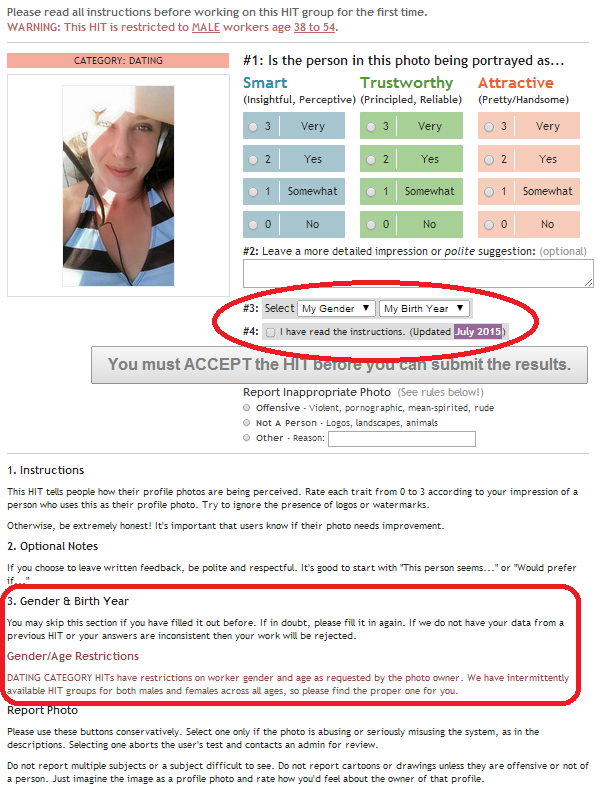 In or around early Dec 2015, Ben moved some of his HIT groups to a slightly different behind-the-scenes format on his own server, but some of his other HIT groups still remain in the previous format (it looks the same without inspecting the code) on the mturkcontent server. The v1.1c update addresses this; and when you come across one that is in the newer format, it will double-check that you're in the right HIT, but I wasn't able to get that to work properly with the ones that are still in the previous format.