This script is no longer supported. You should install the chrome extension instead: Chrome Webstore

Read the documentation for the extension at the wiki: https://github.com/JohnnyRS/PandaCrazy-Max/wiki

A script to organize your panda's and grab them as fast as possible.

** Extension is still in beta so no guarantees everything will work or your data will not be lost. It now has all the features of the original and more efficient with search jobs.**

No further updates for the userscript here will be done unless there is a major change or bug.

Be sure to run script in it's OWN separate window with no tabs because browsers limit timers to 1 second in tabs.

[Beta version] I can not guarantee that things may not break after an update. Export your data as much as possible. Be sure to check out the images below for examples.

This script keeps track of panda's by having different tabs for you to organize. Can also put different panda's in groupings to start or stop all at once. This script uses 1 timer called a cycle to go through each panda. It is set at 970ms. No need to set a timer for each panda. There is a help menu for this script so use it and find out what all the options you can do with it.

To export your hit data you need to go to the jobs menu and then export. Save your data as much as possible.

If the elapsed time is a lot higher than 1000ms than you can go to the cycle menu and push the reset button. It will go back to the original cycle at 970ms if not changed in the options.

While you are working on hits and you get too many going to fast errors you can slow the script down in the cycle menu by pushing the increase button or the add 750 button. Remember to reset the cycle after, though.

This script will work in Chrome or Firefox. Probably won't work in Canary browser because it gets updated so often. 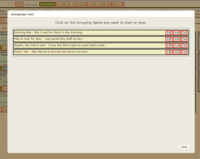 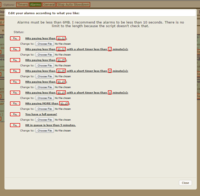